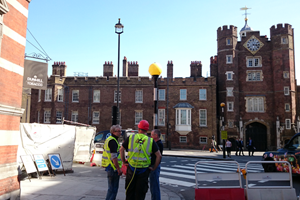 The Trust has been closely associated with the re-introduction of the two-way road system in St James’s which has demonstrated that the new system reduced traffic congestion, especially in Piccadilly, and provided greater room and safety for pedestrians.The Trust had initiated a scheme for the improvement of the road system including the forecourt in front of St James’s Palace. There have been consultations between the Trust and Westminster City Council, English Heritage and other interested authorities, led to approvals for the overall scheme and a multi-million pound funding partnership between the City Council, The Crown Estate and Transport for London. Implementation of the first phase, restoring 2-way traffic working to historic St. James’s Street, Pall Mall, Piccadilly and Piccadilly Circus was completed in phases in 2011 and a second Phase for the repaving in natural stone of Regent Street, St. James’s, Waterloo Place and Haymarket will complete in phases from 2014/15.