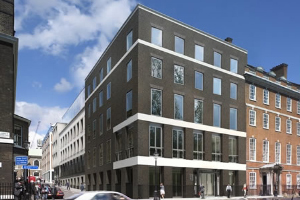 In 2006, the St James‚Äôs Conservation Trust objected to an application for the demolition and redevelopment of 7&8 St James‚Äôs Square. This proposed application extends along the Duke of York Street to Apple Tree Yard. The Trust‚Äôs main objection was the poor design of the Duke of York Street elevation which was lacking harmony with the Wren church at the top of this street. Despite this, on 1st February 2007, the application was granted planning permission in part, but a condition was imposed that there should be a revised treatment for the Duke of York Street elevation. The redesigned elevation, although an improved design, was still not entirely to the Trust‚Äôs satisfaction, but was granted planning permission on 4th October 2007.

In March 2008, the City Council granted an application from the new owners of the premises for a change of use of No.8 St James‚Äôs Square from offices to restored residential use.

In January 2011, a new design, by Eric Parry RA, was submitted, on behalf of the new owners, to Westminster City Council. The St James‚Äôs Conservation Trust was given a preview of the new design and considers this a better design than any of the previous ones. Completion is expected in 2015.